Yesterday was the Pingxi Sky Lantern Festival in New Taipei City’s Pingxi District and I was there! The date of this event changes each year as it celebrates the last day of the Lunar New Year. This year (2018) it was on March 2nd. The Lantern Festival (called Yuan Hsiao Chieh in Mandarin, or 元宵節) is one of the most spectacular night in Taiwan, as thousands of sky lanterns are being released in the sky at night time.

How to get there

Ethan and I were planning on going, but we were having a hard time sorting out all the different ways to make it there, so I decided to let you know how to get to the Pingxi Sky Lantern Festival, back and forth. With tens of thousands people all going to the small village of Shifen (where the main action happens), you need to plan well if you want to avoid huge line-up and long waiting time to squeeze in the bus or a train.

We found two ways to get there (there are probably more): either by taking a bus from MRT Station Muzha (on the brown line, juste before Taipei Zoo) or by taking a northbound train from Taipei Main Station. I thought the train would be a better option as I expected crazy trafic on the way there, but get this : the roads to Shifen are closed to trafic and only shuttle bus will gets you there, which I think is brillant and extremely efficient.

We took a train (any train going to Ruifang will do – but do not take a train to Keelung). The ride is pretty cheap so budget really is not an issue here. Our train left Taipei Main Station at 3:37pm. It arrived already pretty packed. I wish we would have left an hour or two earlier, but we arrived right on time at the end and it was all right.

We’ve been told that we needed to change train at Ruifang to take the Pingxi line.

We arrived in Ruifang just a little before 5pm. From there, the train on the Pingxi line will bring you right at the Shifen train station (you’ll be right there in the action). The next train wasn’t coming for another hour, so we decided to take the shuttle bus instead (for 30NT$, free return included). The line was already pretty long, but we did not wait more then 10 minutes. The efficiency level is quite impressive. They obviously know how to manage!

The roads being closed, it’s pretty much only buses going back and forth, non stop, so it’s pretty easy. Hold on tight, the mountain roads are a bit sinuous! After a 35 minutes ride or so, we were dropped on a street corner and from there we had to walk for about 1km to get to the site.

The walk was lovely. We could hear the sounds of music and animation and we already could see some lanterns in the sky, even though it was not dark yet. 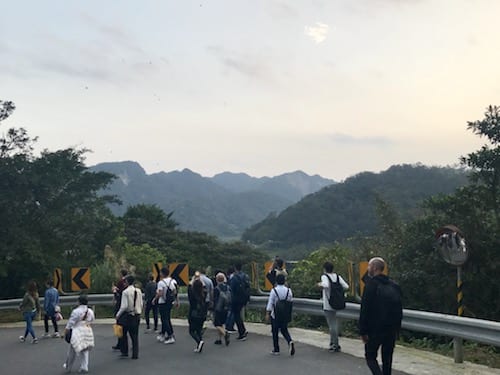 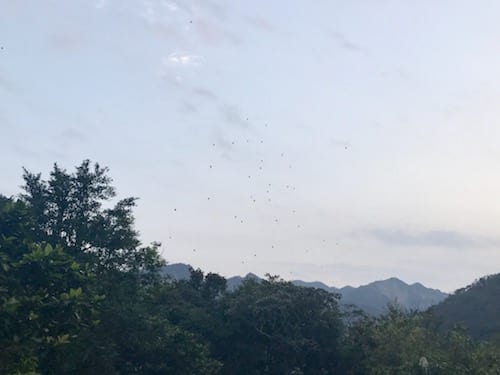 We made it to the site in about 10-12 minutes and we then had two options: either make it left to the stage area, (that’s where the waves of lanterns are being released every 20 minutes – 8 waves in total) or go right and check out the Old Shifen Street first.

What to expect there (besides a lot of people!)

We were early and it wasn’t dark yet so we went first to the Old Shifen Street. That was, I think, an excellent decision. People were already every where on the sidewalks but also, on the rail road tracks. That is where people release their lantern, one by one. 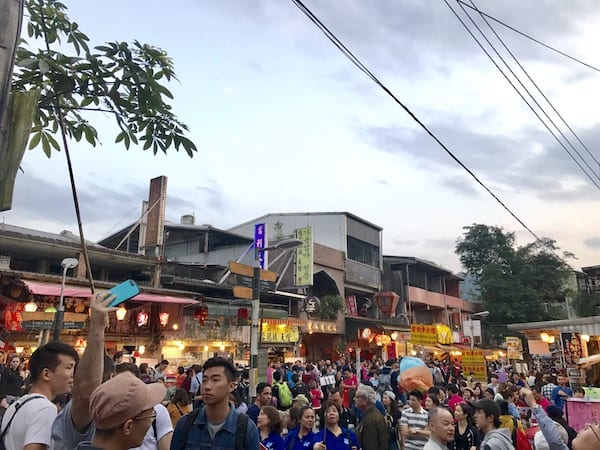 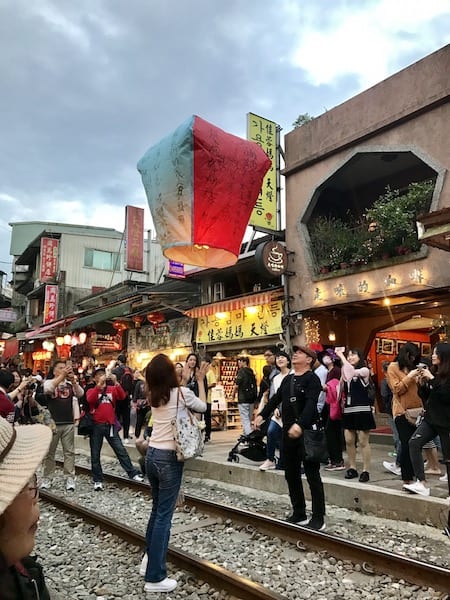 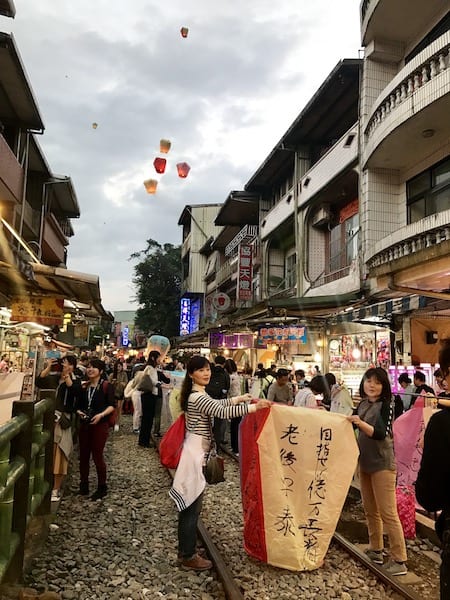 While you walk around and bath in this joyous atmosphere, you can buy all kind of snacks (there are dozens and dozens of little food shacks), souvenirs (I got little tiny paper lanterns in a box) and why not a beer (as in Taiwan you are allowed to drink in the street). 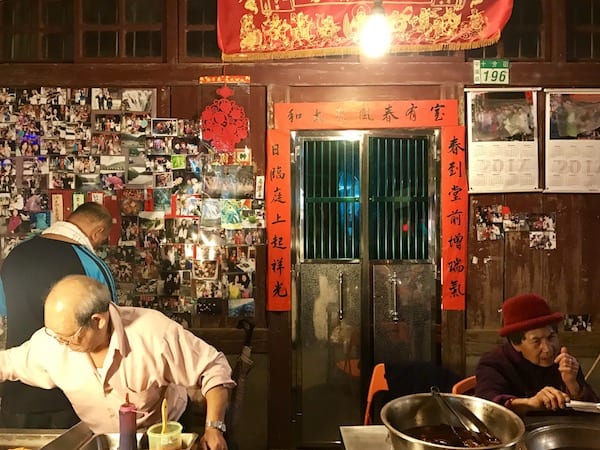 It was pretty amazing to see the joy in people’s face and the general mood of the crowd! This is definitely a special event as tens of thousands of people share the same feeling at once. If you are in Taiwan, and especially in Taipei, you have to come here and experience it – it IS truly a once in a lifetime kind of experience! There is also a particularly large concentration of foreigners attending this festival, as it is known worldwide.

As the night was falling, the lanterns’ lights were starting to look even more magical. 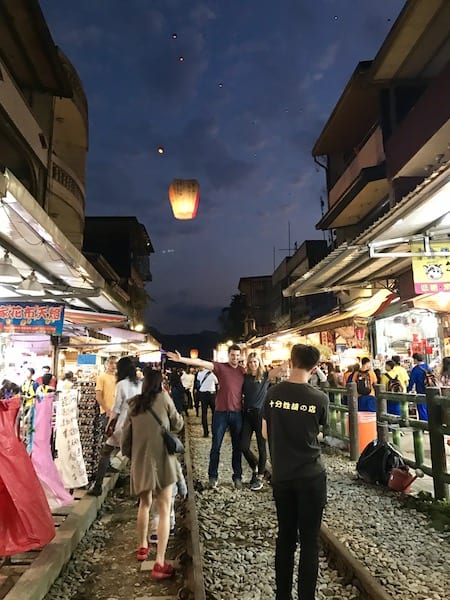 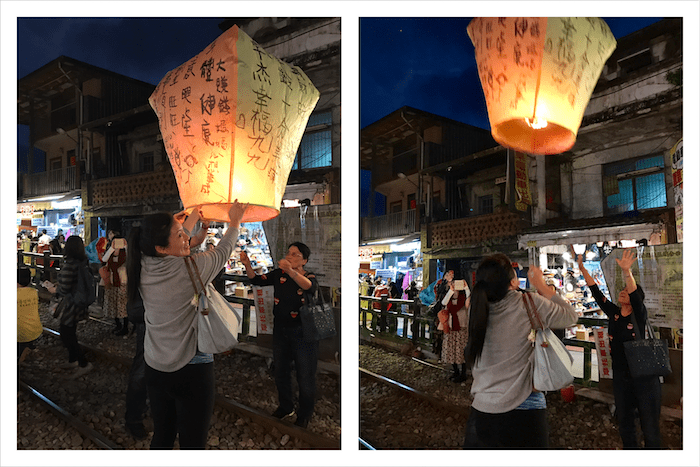 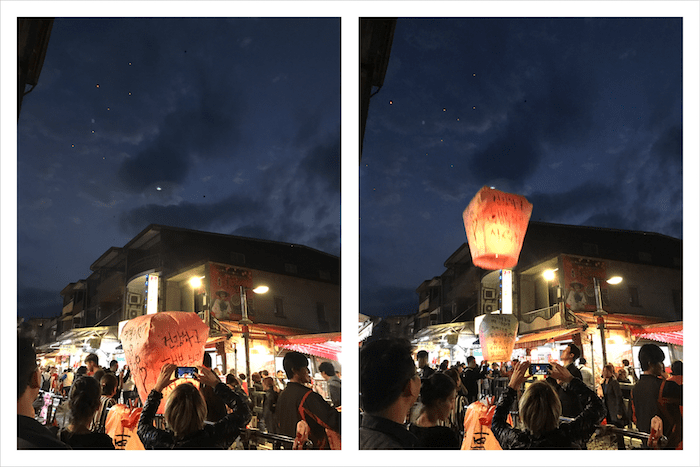 When a train approach, whistles are being blown and the crowd squeeze on the side of the tracks. A bit scary, I must say, and not 100% safe! Ethan really enjoyed it, as you can see here!

We were so enchanted by this spectacle that we were almost forgetting to make it to the main stage to see the waves of lanterns releasing. Two or three of them had already passed and we haven’t seen any so far. So we made our way through the crowd in the direction of the stage. At that point, the crowd was really impressive.

We did not make it all the way to the stage, but close enough to see a wave of lanterns flying gracefully into the sky. The music was magical (Amélie Poulin style, for those of you who knows that movie – every one does right?) and this was a precious, beautiful moment to be remembered and cherished forever for me.

How to come back

Our plan was to see only one or two waves and leave early (before the end) to avoid the mass amount of people all wanting to return at the same time. So after we saw a wave, we headed for the bus. It was about 7:15pm (the last wave, I believe, was suppose to be around 8pm). Since there was no trafic to get out of Shifen, we decided to take the bus this time, so we followed the sign for Muzha MRT Station.

You’ll have two options: stand in the line to get a seated place on the bus or in the line for standing up, which is about 10 times faster. In less then 12 minutes, we were in the bus. They don’t over pack them, which makes it much more comfortable, as the ride to the MRT was about an hour.

There is a stop at the Taipei Zoo MRT Station and we got off there. And from there, well, you’ll have all the choices you want: MRT, buses or a taxi! They are all very easy to find!

If you missed it, don’t be sad. There will be a second night of lanterns release in Pingxi during fall. It will be held later during the year for the Mid-Autumn Festival, in September.

If you decide to go, I hope this article will help you find your way there and back home! It might seem a little bit overwhelming at first, but it turned out to be pretty easy and well organized, so don’t let it stop you from living this amazing moment! 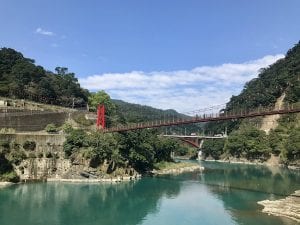 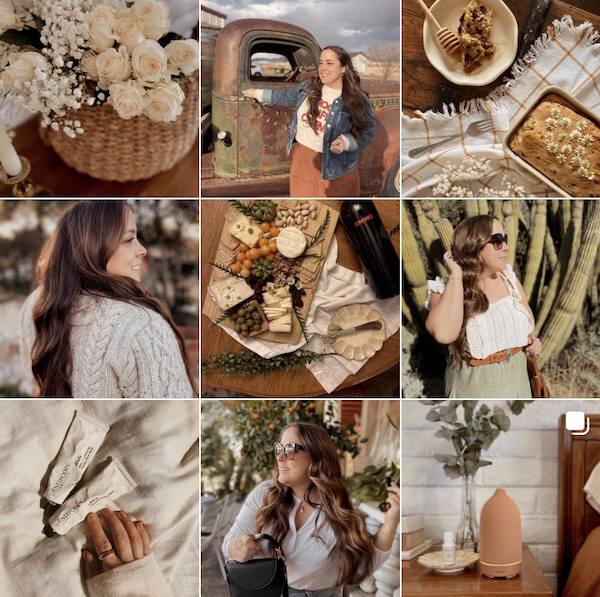 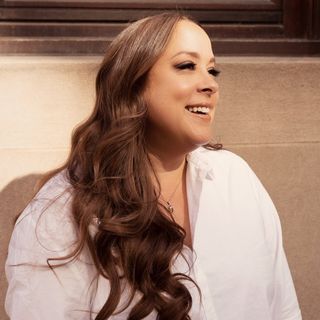